Designing a Pizza Oven to sell! 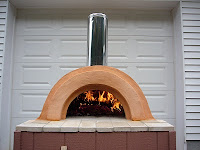 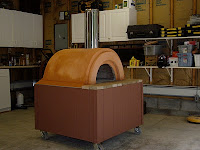 When Karl designed and 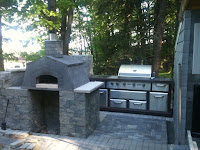 made our oven we had no thoughts to make ovens to sell! Our good friends and neighbor Joe and Chris who also run a apple orchard wanted an oven. They asked Karl to design an oven they could bake apple pie and dumplings with to use by the orchard when they open in the fall and move by the pool for entertaining in the summer. Karl built the oven and it has wheels to move it. We spent a great Fall season making pizza for their customers. They make apple cider at the end of the season with old fashioned cider presses. Last year Amanda and her college friends and Joe and Chris invited friends and customers. I was amazed at all the apples we used and how much work to turn the press by hand! Karl and I made over 20 pizzas to feed the hard workers. It was a really fun day and I can't wait for the end of the next season to do the same. I wish I took pictures to share with you and I will take lots of pictures this fall. Something for you to look forward to seeing!
We had so much interest in the oven and that is what got Karl working over the winter on a pizza oven that was easy to set up and affordable to own. The oven he made for Chris and Joe is not the prettiest oven but the way it bakes and works is just like our fancy oven. Karl and K.C. our son started throwing ideas out and they began building very crude forms to pour the pieces. Karl's brother and partner Harry wasn't too sure we could make an oven and if it would be something that people would want, but he got involved too. He just recently told me he wasn't sold on the idea until he took the oven home and he and his wife Chris started making pizza. He now calls himself "Mario the Pizza man" and they are entertaining and making pizza all the time. Harry and Chris just made our first oven sale and Harry, Karl and K.C. are partners in the oven business!
Karl and Harry are working on another design with a brick base and oven that will be a mid price option for people.
We have a logo that a couple from Ireland designed for us and K.C. and a school friend are working on a web site. This is so exciting for us and I can't wait until we sell a few more and people see how much fun and what a whole new way of entertaining this is! The fact that creating your own fresh pizza that is better then any pizza you have ever ate is also a great reason to have your own wood fired oven.
I think I have moved on from just pizza! My favorite is steak in the oven. I just bought a new cookbook and it is all kinds of meals all cooked with fire in a brick oven. I will share them all as I make them.
For Mother's Day we visited K.C. in Morristown N.J. and he treated us to brick oven pizza at a new restaurant by him. I am really not surprised that we are seeing more brick oven cooking every where we go. I have been seeing more on T.V. also! It is a truly superior way of cooking. I love that it is outside and great for having friends over and it is so fast!
I hope you enjoy the pictures. The first oven Karl created and the base price oven we have for sale. I also included the oven we sold and the creative way they used Versa Loc to build it into their outdoor kitchen.
Posted by kemr at 4:50 PM