Along with making baby-back ribs this weekend, my son K.C. decided to try his hand at homebrewing a batch of beer. Afterall, few things go quite as well with wood-fired pizza as a cold beer.

Since it was his first try at it, he decided to go with a beer using malt extract, if all goes well, he may try brewing an all-grain beer later this summer. He purchased most of his equipment and the ingredients from Midwest Supplies who were really very helpful in the process.

The recipe was a Belgian Trappist style Ale using Belgian candi sugar and a mix of Caramel & Carapils specialty grains with a pilsner malt extract.

He heated up about 5.5 gal. of water to 155 degrees. Fortunately, we had a turkey fryer & propane burner which made the process really easy. It heated up quickly, the pot has a convenient spigot and he was able to do it all outside - no mess!

Once the water was heated up, it was time to steep the specialty grains. The grains are kept in a muslin bag. He did this for approx. 30 minutes. 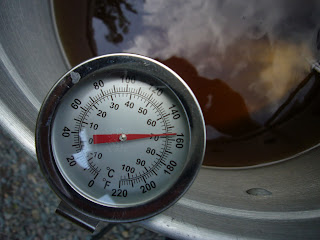 Once that was done, it was time to add the malt extract to the "beer" which at this stage is called wort. The wort is then brought to a boil and the bittering hops are added. In this case, he used 2oz of Hellertau hops and continued to boil for 60 mins.


By now the boiling hops & wort were beginning to look & smell like beer. The hops had a really fragrant, almost floral smell.

During the last 10 mins of the boil, he added the Belgian candi sugar. The candi sugar will increase the alcohol content of the beer (more sugars for the yeast to convert to alcohol) but at the same time balance it with sweetness.

During the last 2 mins of the boil, he added aroma hops. In this case, he used 1oz of Styrian Golding hops. These hops will give the beer a great aroma without increasing bitterness.

At this point, the beer must be cooled to less than 80 degrees before pitching the yeast into the wort. One of the best ways for a homebrewer to do this is using a wort chiller. This is basically a copper coil that you run cold water through. This helps to rapidly cool the wort which in turn will help give the final beer more clarity. If you don't want to spend a little extra for a wort chiller, a cold ice bath will work as well.

Now time for the yeast to do their job. He used Safbrew T-58 dry yeast for this beer. He had planned to use a liquid yeast for the beer - White Labs Trappist Ale #500 - but when the shipment arrived our mailbox had been vandalized and the yeast was no longer viable. The dry yeast can just be sprinkled over the top of the wort. Then seal the bucket and be sure to add an airlock! At this point, its time to wait for the yeast to do their job. By the next morning, there were already bubbles in the air lock meaning the yeast was busy turning the wort into delicious beer.

After a few days, he plans to rack the beer in a secondary fermenter - meaning, once the yeast have done their job, he'll move the beer into a different container to allow it to age a few weeks away from any byproducts of the fermentation.

Prior to adding the yeast, we checked the wort's original gravity with a hydrometer. This is a measure of density which can be used to calculate the amount of un-fermented sugar in the beer. Knowing the original gravity sets a basis to later determine whether fermentation is completed.

The most important thing in this whole process is to be sure everything that the wort comes in contact with has been sanitized. Prior to doing all this, he spent a few hours cleaning everything with a brewery safe sanitizing solution. Even the liquid in the airlock is a sanitized solution to minimize any chance of contaminating the wort as it ferments.

Stay tuned over the next few weeks for updates on the progress of the beer, bottling day, and finally our first tastes of homebrewed beer!
Posted by kemr at 10:04 PM